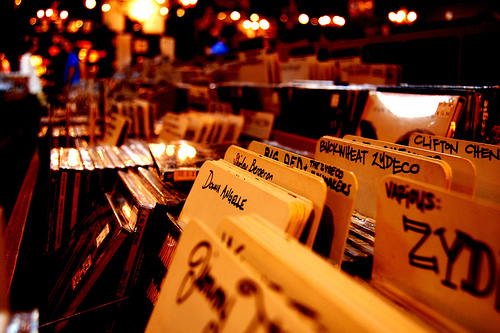 Ever wondered why some super talented musicians don’t get the fan base and recognition they ‘deserve’, while other not as talented musicians get a lot more exposure and seen in all the right places? Well while there could be a number of different reasons for this, one of the most common is that successful person’s ability to handle the business side of the music industry. More specifically, they probably know how to market themselves well.

It’s because of this that many don’t get where they could have otherwise been, and why they struggle to make sales, get gigs, and generally move their music career forward in any meaningful way.

The good news however, is if you’re willing to put in the work, it’s possible to learn how to market your music. There are plenty of guides which show you how to do that on both Music Think Tank and on my site Music Industry How To.

Before you learn specific tactics for marketing your music though, it’s important you get a good idea of what music marketing is and isn’t. There are a lot of common misconceptions about this among musicians, so have a read of the below to see some truths about what it all entails. I truly hope it gets you on the right path when it comes to how you approach the promotion of your music.

1. Marketing Your Music Is Necessary, But Doesn’t Have To Be Difficult

As someone who speaks to musicians almost on a daily basis, I know that many have the feeling that marketing their music is going to be difficult. This is an understandable fear; most people get in the music industry for the love of the music, and don’t think they’ll ever have to learn how to market in order for them to get their music heard.

That said, if you do want to get your music heard, marketing is a necessary part of things. The good news though, is promoting your music doesn’t have to be hard. Pretty much all of it can be learned, and it doesn’t require a degree in science or maths to put into place a solid promotion plan for your music career. As long as you’re willing to learn and put the work in where needed, after a while marketing your music should become second nature to you. Who knows, you may even start finding it fun. 🙂

2. Music Marketing Is All About Raising Awareness

A lot of musicians when starting out feel like if they make their music good enough, they will get noticed. That all they have to do is record a good album, make it available to people in stores (or somewhere online) and their music will start making sales and getting downloads.

While I can see why people would think this, it’s far from the truth! Anyone who’s tried this tactic before will know that this isn’t the case. All that happens is you make 0 or very few sales.

Being talented and letting people know about your talent are two very different things. As well as making music that people actually want to listen to, you need to get them to give you a listen in the first place. After all, how will people know you’re talented if they don’t give you that initial chance?

New acts are coming out all the time fighting for people attention, to the stage where if you tell people online you make music and give them a free copy of your new album, most people won’t even download it. It’s because of this that you need to convince people your music is worth trying out. This is what music marketing is!

If these two things don’t happen, don’t expect your next release to do very well.

3. Marketing Is Often Most Effective When It’s A Two Way Process

While some of things you do to market your music will only involve one way interaction (you relaying a message to fans and potential fans), things will really start taking off for you when you make this interaction with fans two way. By this I mean you don’t always want to be relaying messages to them and then shutting your ears. When you update your social sites for example, as you get more followers, chances are people will often reply to something you’ve said. They want to continue the conversation you started.

What I often see however, are fans replying on musician’s walls, but the musicians not replying in return. Even if they’re asked a reasonable question. While the affect of this won’t be as big if you’re always gaining new fans and have a very big fanbase, when you’re still in the growing stage, replying to the majority of your fans will help you grow a lot quicker.

By getting them involved in your music career, you’re creating more loyal fans who will stick around for a lot longer. When you speak to them, you make them feel like they’re part of your journey. Because of this they’re more likely to support and share what you do.

If you didn’t reply to them however, it’d be more likely they’d become frustrated trying to talk to you, and you continually ignoring them. If then another musicians was giving them more attention, it’s very likely they’d continue following and supporting them instead.

While marketing doesn’t always have to be two way, if you don’t implement a two way dialog somewhere in your music career, you’re going to find it a lot more difficult to build up a fanbase than those musicians who do.

4. The Marketing Of Your Music Is An On Going Requirement

This is a big one. As well as being aware that it’s important to market your music, it’s also important to realize the amount of time and effort that goes into this process. Most people initially think that the marketing process should start when you’re about to release your next album or single, and should end before you start working on your next project. This isn’t strictly true.

The marketing of your music should begin as soon as you’ve a good level of talent to promote. While the degree of marketing you undertake at the time will depend on what exactly you have to promote and what else you have on your plate, marketing should be an ongoing process for as long as you’re trying to become a more successful musician.

5. Getting Others Involved Will Make Your Marketing Efforts A Lot Easier

While music marketing isn’t that difficult once you know how to do it, it still requires a lot of time and energy to do it to the extent needed to make consistent money from your music. Often, doing all the marketing needed alone can lead to much slower progress, frustration, and possibly burnout.

The solution? Getting others involved with the promotion process!

This can be in the form of getting your fans to help you out, hiring a marketing team or knowledgeable individual, or eventually letting a record label largely handling that side of things for you (although it’s still important you learn how to promote your music too so you know if the label is taking things in the right direction for you).

More hands make lighter work; it’s not a good idea to do everything by yourself once you know you have something that people will really take too, So get others involved once your talent level is at a good level and you know what direction you should be heading in.

6. Initially, No One Will Help You!

That’s right. When you’re a new independent musician, you won’t get much outside help. Ok, so you might get some help from a friend who likes your music, but other than that, don’t rely on record labels or fans to help you promote your music. Why’s that? Simple, because record labels don’t generally work with unproven musicians, and you won’t yet have a fan base at this stage.

In order to move things forward for yourself, you’ll need to learn to market your music, and increase your status all by yourself. Once you’ve done this and have something to show for your efforts (gigs under your belt, being covered in respected place etc), then it’ll become a lot easier to get people to help you push your music further.

7. If You Only Promote Your Music Online You’re Losing Out

Gigging is one of the biggest reasons you shouldn’t stick to online music marketing methods. By gigging, you get to connect face to face with your audience, make instant money by selling merch and physical CDs (a lot of gig goers still buy them), and make money from royalties.

Another thing you’ll want to do offline is chase up opportunities. Email can be a slow process, but when dealing with companies, often a phone call or going to see them in person can speed things up considerably. Not only that, but you have the chance to potentially connect with them in ways others who go through email simply won’t.

Of course, these aren’t the only ways to promote your music offline. Don’t focus strictly on online music marketing, as working within your comfort zone will most likely slow things down for you in terms of progress. So give offline music marketing a go too.

These things are important to know before you start implementing specific music marketing strategies, as even the most powerful promotion methods will become less effective if you don’t know when and how to use them.